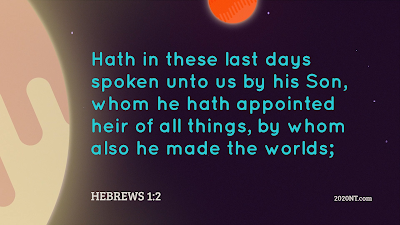 Big Idea: The Son of God is the ultimate revelation of God.

Our study through the New Testament in a year moves from Matthew, the gospel of fulfillment, to Hebrews, the letter of the supremacy of Jesus. I have put these together because they are both rich in Old Testament allusions, and help us to see how God's plan is the same from beginning to end. Everything in Israel's religion and history pointed forward to Jesus, and He supersedes and fulfills everything which went before. Hebrews is the book about moving beyond symbols and pictures into the heavenly reality ushered in by Jesus Christ. The Supremacy of the Son of God is in many ways the theme of this powerful book.

In the Old Testament, God revealed Himself in many ways. He spoke through prophetic utterances, through visions and dreams. Even the laws and historical records of the Old Testament taught the people about who God is, by revealing what He values and what He resists. These all truly revealed God's identity, but incompletely. But now, God has shown us who He is by sending His Son into the world. While the previous revelations were partial, this one is total, to such an extent that if we reject Jesus, we have rejected God (1 John 2:23). Jesus is God's face pressed into our world, and it is only through Jesus that we can know God personally.

Hebrews 1 reveals several ways that Jesus reveals to us who God is. First, He is the one who made and sustains the entire cosmos (Hebrews 1:2-3). Second, He has purged our sins by His blood, when He died on the cross as the innocent sacrifice for our sins and offered Himself up as our great high priest (Hebrews 1:3). Third, He lived a sinless life, choosing good and rejecting evil (Hebrews 1:9). Finally, He sits enthroned as the eternal king (Hebrews 1:10). When we see the Lamb that was slain, giving us life from an eternal throne, we truly know who God is.

Younger kids: Draw a picture that represents someone you love. What would you put around them or in their hands so someone looking at the picture would understand who they are?

Older kids: How do some stories you know from the Old Testament partially teach these same things that are revealed finally in Jesus?

Discussion idea: What are some false ideas people have about God which would be corrected by a better study of Jesus?
Prayer focus: Praise God for His humility in revealing Himself to us, and pray for the desire to know Him better.
Posted by The New Testament in 2020 at 12:00 AM