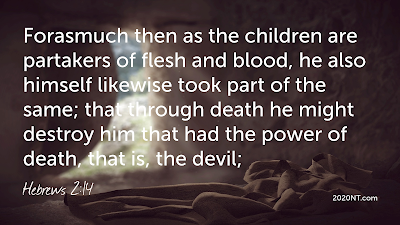 Key Verse: Hebrews 2:14
Big Idea: The Son of God became the Son of Man so the sons of men could become sons of God.

We know by faith that God has promised us a role as joint-heirs of Jesus, but we do not see that revealed in our world yet. Instead, we see Jesus and what He did: humbled Himself to become a Man so that He could taste death for every human being who would ever live. Because He has paid the price and laid the path for us to be His brothers and sisters, we know that He will finish what He started.

But when Jesus takes us into a new family, He is also distancing us from an old one. We leave the house of slavery to join the house of the Son of God, breaking the Devil's bonds of sin that lead to death and replacing them with the bonds of love. Jesus became like us and lived a perfect life, so that He could be a merciful High Priest. He has been tempted like we are, so He knows the struggle of temptation, but He never gave in, so He is able to approach the Father on our behalf and bring us forgiveness.

Older kids: Have you ever gone through something that you felt like most people did not understand? What difference does it make to know that someone knows what you are going through?
Jesus left the splendors of Heaven to come to the sin-wrecked Earth. He died for the sins of all mankind, taking the punishment that we all deserved. He returned to Heaven, but not to live there alone, but to let all of the people who trust in Him to join Him in glory and worship forever together. What a High Priest! What a Savior!


Discussion idea: Jesus humbled Himself by becoming like us, so that we could become like Him. What are some lesser ways that we can come to people on their level, to show them God's love through us?
Prayer focus: Pray for opportunities to follow Jesus' example of humility and compassion, whether sharing the gospel, meeting a physical need or just being there for someone.
Posted by The New Testament in 2020 at 12:00 AM