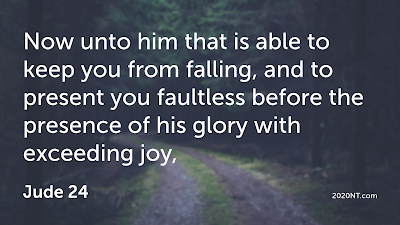 Key Verse: Jude 24
Big Idea: In the face of temptations, it is God that holds us up.

Jude, like James, was written by one of the other sons of Mary. Interestingly, rather than call himself the “brother of Jesus,” he introduces himself as James’ brother and Jesus’ slave. This letter is a somber one, warning about hypocrites who had worked their way into the congregation. They told people what they wanted to hear, but were like clouds in a drought that looked promising but offered no rain. There is probably nothing worse than someone who has the appearance of faith, but not the power of the cross.

In the past, vaccines were based on giving someone a weakened form of a disease or a similar, but less dangerous one. The immune system would be trained by that pathogen, and would be ready to resist the real thing later. Christianity as taught by these teachers is just a weakened mockery of the real faith, that does nothing except desensitize people so that they never catch the real disease. They are worst off then when they started, because they make a mockery of the grace of God.

How do we deal with these kinds of temptations? It will not be in our own strength, because being told what we want to believe is too tempting of an offer to refuse. James offers a simple answer: keep growing in faith, keep praying, keep looking for Jesus to return and keep leading others to Jesus. The key to prevent the infection of extravagant false teachers is to live the ordinary Christian life. How can that be? While the false teachers point to themselves and their pleasures, authentic Christianity is a continual dependence on God. As the benediction explains, believers are eternally secure because Jesus is the one who keeps us from stumbling. We simply trust and worship, and He brings us to Himself washed clean.

Discussion idea: What makes certain lies appealing? How do fake friends, salespeople, etc. offer us the bait we want to hear? How and why are God’s portraits of Christianity in the Bible different?
Prayer focus: Thank God for a specific instance when He protected you from yourself and for the eternal security we have in Christ.
Posted by The New Testament in 2020 at 12:00 AM