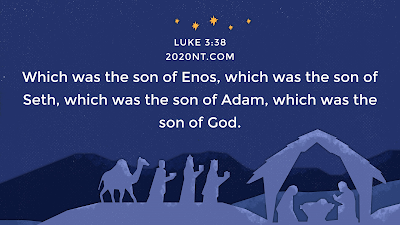 Key Verse: Luke 3:38
Big Idea: The Son of Man came as the Savior of all humanity.

Before Luke described the birth of Jesus in the first chapter, he talked about the man who would be born before Jesus, to prepare the people for His arrival: John the Baptist. John would call the people to repentance and faith, baptize them as a symbol of that faith and so prepare the raw materials which Jesus would use to assemble His first church. Fulfilling the prophecy of Isaiah 40:3-5, John would come and prepare the path for the Lord, and did so by teaching the people to trust the One who was coming and to obey Him. By our chapter today, Jesus is a man, ready to make His public debut through His baptism. Before Jesus comes to John, the religious hypocrites ask to be baptized. John's words against them are sharp: they are hypocrites and vipers, wanting protection from God's wrath by ritual, without changing their hearts. Neither the water of the Jordan River nor their Jewish ancestry would protect them, because God could raise up children for Abraham from dead stones if He wanted to.

In a sense, that is exactly what He did. From the dead, rock hard hearts of the Gentiles, God would draw people out and bring them into Abraham's family: people who were not circumcised in their bodies, but in their hearts. Baptism, as the symbol of the new covenant, was only meaningful if the person had already repented of their sins and trusted in the Messiah. Anything less than that was a mockery. But for those who did repent and believe, forgiveness was free. There was no ancestral requirement, no economic, political or social distinctions: Jesus was coming to be the Savior of all humanity, and that salvation would be received by everyone who received Him.

Luke reinforced that point (and the portrait of Jesus as both fully God and fully human from the first two chapters) by giving the genealogy of Jesus here, even though we might have expected it earlier. While Matthew's genealogy goes back to Abraham, Luke takes His ancestry all the way to Adam and to God. Jesus has not come just for one tribe or nation, but for all of humanity. Just as Adam was born without parents, Jesus was born of a virgin, as the second Adam come to recreate humanity in His image. You and I may not be important by the world's standards, not pretty enough or rich enough to be worth much trouble, but the Son of God came down from Heaven for us.

Discussion Idea: How does Jesus' impartial love for all of humanity influence the way we should treat other people? If we are tempted to pride, how should it correct that? If we are tempted to depression and self-pity, how should it correct that?
Prayer focus: Pray that the next time you are interacting with someone you do not know well, that God would open your eyes to see them as He does: sinners, yet loved. Praise God for His mercy in dying for us, not on the basis of who we are or what we have done, but because of who He is.