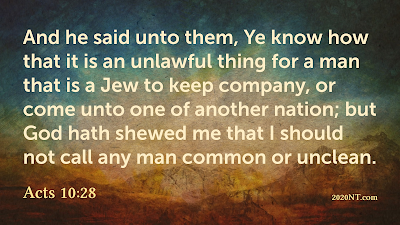 It seems like every time I open my Bible to write these devotionals in the book of Acts, I am saying "what an important event!" It is always true, but today's reading might be especially important. The church at Jerusalem had been made up of Jews and Jewish converts, who had come to Christ. Some had been Hellenistic Jews and some Hebraic Jews, but they still shared a basic identity. The new churches also fit this same demographic, including the one Peter was worshipping with at Joppa. From childhood, they had been raised not to go into a Gentile's home (that is a non-Jewish person) or to have a Gentile in their home. Racism and nationalism ran deep, and even once Christ had freed them from the Law, they still carried an assumption about the way things ought to be.

This all changed when God gave Peter a vision, where He offered him a wide assortment of foods forbidden under the Law. God told him to eat, but Peter declined, because he had never broken kosher. While it is true that God had lifted the food restrictions (the mark of a church today is not food, dress or furniture, but love), that is not the point He was making. Instead, God was showing Peter that the old lines of clean and unclean no longer applied. Anyone in Christ - whatever their past (as the case of Saul), whatever their ethnicity (as in the case of Cornelius) and whatever their hardheadedness (as in the case of Peter) - came together as one family. The local churches formed were not to be Jewish churches or Gentile churches (still less black churches, white churches, rich churches, poor churches, old churches or young churches). They were to be churches that called no man unclean that God had cleansed; the only lawful division was the blood-bought and the lost. This was hard for the members of the church at Joppa to admit, and it took a miracle to get their attention. Before we judge them too harshly, a frank drive around the churches of today show a sharp separation too. Some may look with disdain on those underweight or overweight, Republicans or Democrats, people wearing a mask or not wearing a mask. The division may be class based, racial, cultural or something else, but the fact that we are One Family with One Lord should overcome all the old barriers. He has built His churches of His people, and our identity in Him makes everything else a footnote in comparison.

Discussion idea: Why do you think that some boundaries are so hard to overcome? What kind of person do you think you would struggle the most to see as a leader in your church? What kind of person would you struggle the most if they married your child?
Prayer focus: Pray that God would help you to not call someone unclean that He has cleansed.
Posted by The New Testament in 2020 at 12:00 AM