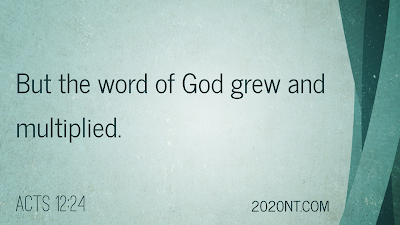 Acts 12 begins with one of Jesus' three closest apostles being martyred. We might expect Luke to dwell on this, describing some of the drama like he did with Stephen's martyrdom back in chapter 7. But instead, the death of a key figure from the gospels is recorded so quickly that a skimming reader might miss it - a single verse. Why is this tragedy not dwelled on? I think the answer is obvious: because this defeat is no defeat. Individual Christians might die, local churches might fall, but Jesus promised in Matthew 16:18 that the gates of Hell would never overcome His church; the institution prevails. Throughout the ages, churches have faced persecution (often from others claiming to be churches!), but they have always persevered. Sometimes driven underground, sometimes few in number, but the right side of history is ultimately God's side.

Younger kids: Have you ever run in a relay race? How does it work? How are churches like that?

Older kids: When you die, what will remain of your life? Do any of your goals and ambitions stretch beyond yourself enough to be part of God's age-long movement?

Herod Agrippa, who killed James, was himself killed by God for his blasphemy. But when that kind died, the word of God grew and multiplied. In chemistry, there is a principle called Charles' Law: the greater the heat, the greater the expansion. Over and over again, the churches of the Lord Jesus have proven that is true for us. The enemies of God's people may seem triumphant for a minute, but joy comes in the morning.

Discussion idea: What are some things now that seem to oppose the expansion of Christianity? Will any of them be successful? Why or why not?
Prayer focus: Praise God that He is the One who accomplishes His work, and ask Him for help prioritizing the things that will last.
Posted by The New Testament in 2020 at 12:00 AM