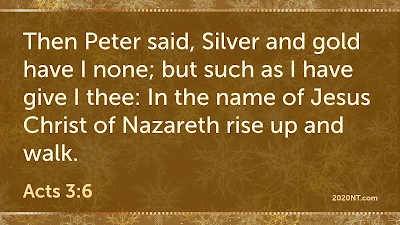 Key Verse: Acts 3:6
Big Idea:  The Church of Jesus has treasure greater than what money can buy.

Outside the temple was a beggar. He had been unable to use his legs from the day he was born, and depended on the kindness of others to survive. His eyes facing the ground in shame, he reached out his hands and asked some men walking by for a little money to help him get something to eat. Instead, they gave him something much greater. The apostle Peter told him that, although they did not have silver or gold, they would give him what they did have, and by the power of Jesus, he healed the lame man. Instantly, the lame man had the strength and skill to walk and leap. But he had not yet received the greatest gift that Peter and John had to offer.

A crowd gathered to see this man's miraculous recovery, and Peter began to preach to them. It was not his own power or holiness that had healed this man, but his faith in the risen Jesus, who they (as a society) had handed over to Pilate to kill. That same Jesus had reached down and healed the lame man, and that same Jesus was ready to forgive them, if they would ask him. Far better than gold or silver and far better than the ability to walk: they offered the gift of eternal life.

Discussion idea: Do you think churches should help people with physical needs? How should that be tied to the priority of the gift of eternal life?
Prayer focus: Who are some people who told you about Jesus or taught you to walk with Him? Pray and thank God for them by name.
Posted by The New Testament in 2020 at 12:00 AM