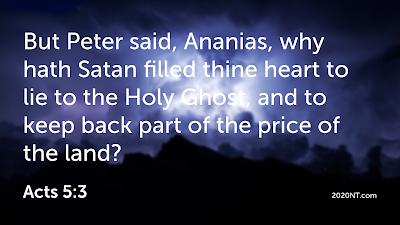 Key Verse: Acts 5:3
Big Idea: The Church of Jesus can only operate with integrity.

The continuing saga of the church at Jerusalem is interesting: God's people grew stronger when faced with external opposition. As they were rejected by the outside world, they were forced to depend on each other ever more intensely. They sold their property and lived with all things in common, probably because finding work when their Jewish neighbors considered them heretics was more and more difficult. But the greatest test to their fellowship yet was not beatings or mockery, but plain old human greed.

Older kids: What kind of temptation is more challenging for you to resist: direct challenge, or someone acting like a friend? Why?

Ananias and Sapphira were members of the church at Jerusalem, who sold their property, but held part of it back for themselves. They apparently wanted to live out of the community's resources, while still keeping something for their own luxury. It is obvious that if many people did this, the whole community would collapse. Maybe it is less obvious that the risk was much more than financial: a church can only function when she has integrity. Hypocrisy and self-serving attitudes undermine everything Jesus taught, and miss the point that God knows our hearts and wants us to belong to Him completely. Ananias, and then Sapphira, were struck dead for trying to lie to God (a silly claim), and the whole community was awestruck. God removed a bad witness, where their sin was undermining the gospel, and created a good one: God is holy, and cannot be deceived. The church at Jerusalem was protected, and Jesus' ministry continued to spread.

Younger Kids: Have you ever had to leave somewhere because of the way you were acting? Did your family still love you? If God took Ananias and Sapphira home to Heaven because of their actions, did He still love them?

Discussion idea: Why did God act so decisively in response to this sin? What are some similar actions today regarding the church which we might take lightly, but which God does not?

Prayer focus: Ask God to help you identify the subtle areas where you are most vulnerable and protect you from those temptations.
Posted by The New Testament in 2020 at 12:00 AM