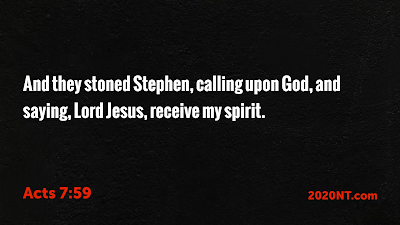 Key Verse: Acts 7:59
Big Idea: Sometimes the Church of Jesus is victorious in what looks like defeat.

Today's reading marks the first great tragedy of the church at Jerusalem. They had been beaten and rejoiced, they had faced sinners within and overcome, they had dealt with division and emerged stronger. Yet in Acts 7, we read about one of the first deacons who gave a bold testimony for Jesus and did not find himself rescued by an angel. No one stood up and talked the crowd down. After Stephen summarized the whole history of the nation, to show how Jesus and the people's rejection of Him was the culmination of the whole Bible, they grew furious instead of convicted. Stephen was given a special vision: he saw Jesus standing at the right side of the Heavenly Throne, and told the people so. They stuck their hands over their ears and screamed to drown him out. In a mob, they pushed him out of the city, picked up stones and threw that at him until he died. His crime was blasphemy, for suggesting a man who had been crucified could be at God's throne. The witnesses took their outer robes off to participate in the stoning and laid them at the feet of a young man named Saul, who we will meet again.

After such a string of victories, was this finally the end of Jesus' assembly's success? No. It was through defeat that they would triumph. Stephen, even in His death, prayed for Jesus to receive Him and to forgive those who killed him. He overcame them, even in death, by refusing to crumble into sin. He overcame them because his prayer would be answered dramatically when the man overseeing his execution would be forgiven and used by God to write more books of the Bible than anyone else. In a powerful imitation of His Lord, Stephen was most powerful when he appeared the weakest.

Discussion idea: How can not defending yourself sometimes accomplish more than defending yourself? How does God make good out of a bad situation?
Prayer focus: Pray about a difficulty in your life, and ask God to use it to advance His Kingdom, no matter what the consequences for you personally.

Older kids might be interested in the way that stoning was legally carried out in Israel (at least by the late second century, the earliest detailed record we have). The first witness was required to push the person off a cliff of about 12 feet. Then the second witness was to drop a large stone on the criminal's chest, and if they survived, the crowd was to throw rocks at them until they died. The idea was that the witnesses were required to fully accept their status as murderers if they lied, and that like a firing squad, no one would know for certain who had delivered the lethal blow, making it an act of the community's justice rather than individual revenge. This is a far cry from the way stonings are carried out in some Muslim countries today, where it is designed as a form of torture.