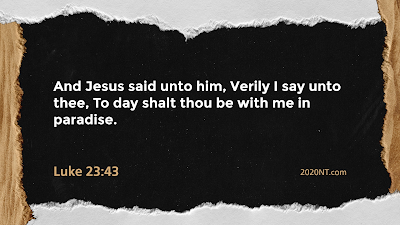 Key Verse: Luke 23:43
Big Idea: The Son of Man died among and for sinners.

From the illegal Sanhedrin trial, Jesus was led to Pilate, the Roman governor. Pilate found no crime but decided He was Herod's jurisdiction and Herod's problem. Pushed through the night, Jesus stood his third trial. Herod stalled, mocked, but sent him back to Pilate without making a decision. But the people cried out for Him to be crucified, whipped into a mob. Jesus was then led to a hill called "The Skull" to be crucified.

He was not to die alone, but with one criminal on each side. The One who had done no wrong was counted among the wicked and the wicked surrounded the foot of His cross, gambling for His clothes and scoffing at Him. He prayed for them to be forgiven, and although He could have, ignored their challenges to come down off the cross. He was not just between two thieves but voluntarily stayed on the cross for their sakes. Although both of the criminals initially joined in the verbal attacks, something about Jesus must have touched the heart of one of them.

He acknowledged that He was crucified justly and that Jesus was not. He asked Jesus to remember Him when He came into His Kingdom. This crook, on his last day alive, admitted He was a sinner, believed that Jesus was dying for Him and that He would rise again victorious, then He called on Jesus to save Him. As He has untold millions of times, Jesus did save Him. When our heart sees Him on the cross, the response that we need is: that ought to be me. Lord, rescue me! The Son of Man, who was sinless but took the penalty of sin for us, is ready to deliver us from it. When He died on the cross, the veil that separated people from God was torn and He voluntarily gave His life up.

Discussion idea: Why do you think the thief came to faith in Jesus? What about the events of the chapter might have touched His heart? What about it touches yours?
Prayer focus: Pray for the salvation of those far from Jesus, and forgiveness of our own sins.

PS Here is a great song about the thief on the cross: https://www.youtube.com/watch?v=bwBDLGuwTns
Posted by The New Testament in 2020 at 12:00 AM