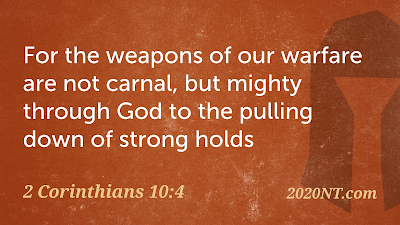 Key verse: 2 Corinthians 10:4
Big idea: Our strength is not in the weakness of the flesh but in the power of the Spirit.
Imagine if George Washington could walk around the US today. Some things might confuse him, some things might impress him and some things might upset him. But eventually, he might want to know about the US military. Imagine: "How many musket men can the federal government assemble?" Before you could finish explaining that we have no muskets at all, he might ask about cavalry. A country of 300 million people with fewer than 200 horses at the Army's disposal would probably not impress the man who established our mounted force in 1776 [source]. If you tried to explain to him that the US military is the most powerful fighting force in the world, his ignorance of nuclear bombs, drones and ICBMs would make it hard for him to understand. Warfare today is fought with tools and on a level that Washington knew nothing about. Crossing the Deleware River would not have worked with night vision binoculars and machine guns on the other side.
As silly as it would be to try to storm Fort Bragg with muskets, it is far more foolish to try to fight a spiritual battle with physical weapons. Paul argued that his opponents, looking at outward appearances, misunderstood his strength as surely as Washington would ours. The things they thought were weakness (like meekness and gentleness) were profound strength. Our battle is not waged primarily in our bodies, although our bodies certainly reflect the state of the conflict. Rather, our battle is against the idols set up in our hearts and minds, strongholds that must be torn down but are impervious to cannon fodder. The things that seem to be strong in the physical realm give us nothing but pride. If we are going to have any strength to boast in, it must be the Lord's.
Discussion idea: What strongholds in your mind need to be torn down by the Word of God?
Prayer focus: Lord, help us to put our trust in you and your resources alone, with no confidence in our own power.
Posted by The New Testament in 2020 at 12:00 AM