The conquest of Jericho is a story that many of us learned in Sunday School, but let me try and give it to you in some detail. You can see from the map that I have uploaded below that the Israelites had come up from Egypt, wandered in the desert for 40 years and were finally entering into the land God had promised. They had crossed the Jordan River (marked in yellow, connecting the Sea of Galilee to the Dead Sea), and the first major city they faced was the fortress of Jericho. It was called the "city of palm trees" because of a spring providing water and fertility and has been settled for all of recorded history. The old city was built on a hill 400 yards long and 200 yards wide (about 16 acres), and 70 yards high (about the height of a 20 story building). Around this was a thick wall (at least at some point in Jericho's history, they were 12 feet thick), punctuated with guard towers.

If the Israelites could conquer this city, it would result in a huge psychological victory over the other inhabitants of the land. If they walked by it unconquered, the Canaanites would have a constant stronghold to resist them. The battle must begin at Jericho. But how could the Israelites conquer? 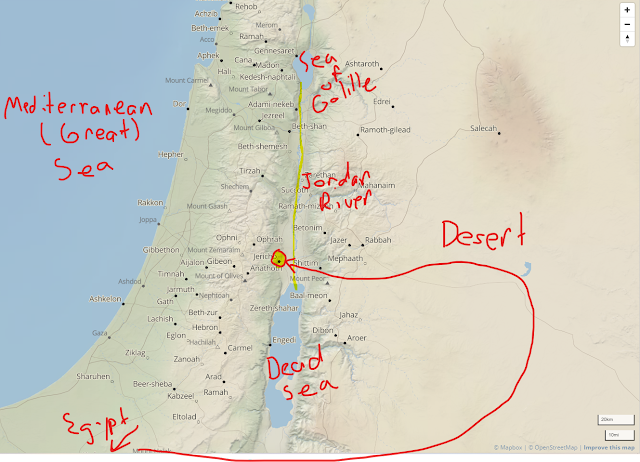 They would not be able to do it in their own strength, but God did not expect them to. He turned the conquest of Jericho into a religious ceremony and even decreed Jericho as a holy place. The priests led the "assault." Six days of silence, walking around the city once a day for each day. Not doing anything themselves, but waiting on God. On the seventh day, the seventh time around, the priests blew their sacred trumpets and shouted in triumph, then the walls collapsed. The residents of Jericho were confused, weakened, and the Israelites needed only to march in and overcome them. The victory was not theirs, but God's! I wonder how different our lives would be if we saw conflict and challenges as worship. We are being given a chance to put God's grace and glory on display, if we will let Him.

Discussion idea: What is a modern equivalent of the priests leading out in a conflict in your life? How can you let your spiritual priorities take the lead, instead of the backseat?

Prayer focus: Ask God to help you turn to Him first, not last.

Big Idea: The Son of Man is coming soon.

Luke 21 is sometimes called the little Revelation. It describes in abbreviated form the events of the end of the age and ends with a call to be ready. Many people are consumed with prophetic charts and timelines, trying to set a date or place a name on every detail. Interestingly, that is not the emphasis that Jesus places at all. In the Texas CDL handbook, one piece of advice stood out to me. It said something like: "The best way to have both hands on the wheel in an emergency is to always have both hands on the wheel." Jesus' warning is that, because He will come suddenly, we should always live the lives we would want to be living if He came today.

What should we do instead? The Son of Man's simple advice is to pray that we will have the strength to stand. We cannot resist these pressures in our own strength, and if we really believe the coming of the Lord is soon, we have no time to fool around with impossible schemes. Be alert and pray - the two hands on the wheel.

Discussion Idea: What kind of temptation, negative or positive, is the most distracting to you? Why? How can you pray about that?