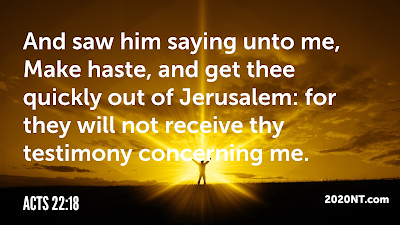 Key Verse: Acts 22:18
Big Idea: The churches of Jesus are made up of people who have been changed.
Younger kids: What is your favorite story, that you love to hear over and over again? What do you like about it?

In Acts 22, we come to the second account of Paul's conversion. There will be one more before the book ends, so that the same story is told thrice (with increasing detail) in a book of only 28 chapters. In Paul's letters, he gives the account personally twice more (1 Corinthians 15:3-8 and Galatians 1:11-16). Of all the events in the New Testament, the only one I can think of described in more places is the Resurrection (the Great Commission is a tie). Obviously, it was important to Paul, but why did the Holy Spirit place such an emphasis on his conversion in the Bible? I think perhaps it is because his salvation is a model for all of us. We begin as enemies of Jesus, opposing Him by opposing His work, and yet He still pursues us. When He catches us, it is not to destroy us but to rescue us. Paul's conversion seems dramatic, because his sin was so overt, but our own is no less of a transition from death to life and darkness to light.
Older kids: Before he became a follower of Jesus, Paul had hunted Christians down, kidnapped them and returned them to Jerusalem for execution. What kind of people today would seem so unlikely to be saved?
When Jesus assembles local churches as His temple and His body, He does not begin with materials that are perfect. Instead, He takes radically sinful people and transforms them from the inside out. This is both encouraging - we are so precious to Him that He does not cast us aside - and humbling - we need such radical transformation to be fit for His use. Paul's account of his own salvation is that he had been as zealous in opposing Christ as anyone, but that when Jesus reached Him, he had to recognize he has been going in the wrong direction. God does not use us because of who we been, but because of who He will make us.
Discussion idea: Could God have simply used sinless angels instead of sinful people? Why did He choose to use us, despite the difficulty? Does repetition of the same story of God using Paul, even with his past, encourage you to trust that He can use you too?

Prayer focus: Praise God for the radical change He has made in your life, either before or after conversion, with specific examples.
Posted by Chris at 12:00 AM