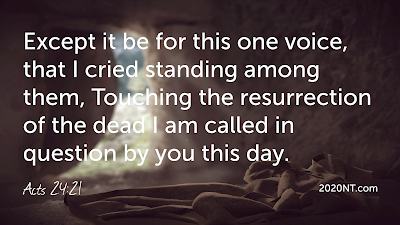 Key Verse: Acts 24:21
Big Idea: The Church of Jesus is built on the resurrection.

Paul had been providentially protected and smuggled in the night to the palace of Herod to await his accusers. Ananias, the high priest who ruled from AD 48-59, came with a lawyer to make his case against Paul to Antonius Felix, the procurator of Judea. Ananias didn't need to follow Paul through this trial, but the same temper that he had displayed at the Sanhedrin (Acts 23:3) brought him to Caesarea with a heart full of hate. The charges were a desecration of the Temple and inciting the people.

Paul quickly showed that both were ridiculous. He had been purified in the Temple, and if he had started a riot, there would be witnesses. No, Paul told Felix, he was on trial for one thing only: the resurrection of the dead. Over and over again, the book of Acts hammers home this theme. If death is the end, for Jesus and us, then the life of Christ means nothing. But if He rose from the dead, and we will too to give an account of our lives to God, the life of Christ means everything. In Acts, we have seen the ongoing works of Jesus through His body. By this point, the churches have overcome social, racial, and cultural barriers to form coherent bodies.

If God is not assembling us by a common set of interests or a common background, what is the secret? Paul would boldly testify that it is the resurrection of Jesus that breaks down all old barriers and brings us together. Our unity is centered not on a style of music, a type of outreach, or an earthly political allegiance. The historical fact that Jesus died and rose again is the center of the Christian faith, and without it, there is nothing. Calvary is the hill worth dying on because all of our hope is in our Savior who gave His life and took it up on the third day.

For two years, Paul would wait in prison without resolution, but he continued to preach the same message, to guards, to Felix, and to anyone else who would listen. Felix was looking for a bribe, Ananias was looking to take a problem off his hands, but Paul only cared about one thing: Jesus died for me and rose again. That is the foundation of my life individually, of your life and of our life corporately. We are bought with a price.

Discussion idea: Does it matter that Christianity is based on a historical event, instead of a statement or a vision? Can you have something like Christianity without the resurrection of Jesus?
Prayer focus: Pray for boldness, like Paul had, to preach Christ crucified at all times, and to not let our deepest fellowships be built on anything else.