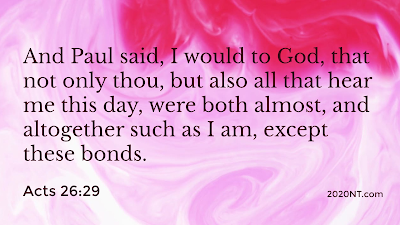 Key Verse: Acts 26:29
Big Idea The churches of Jesus exist to reach people with the message of Jesus.

In high school, I competed with some success in Lincoln-Douglas debate. My favorite part was the cross-examination portion, where you could lead someone along a path, and have them inside the trap before they ever realized it. In a moment, everything they said came crashing down on their head. Although most of the debate was still to come, they had already lost. When Paul stood before Agrippa II and Festus, he could not hope to trap some opponent by a sleight of hand. He had already appealed to Caesar, so his release was out of the question. More to the point, Paul’s biggest goal was not to be released from prison (and certainly not to win an argument) but to see people trust Jesus as their Savior.

Older kids: Have you ever been arguing with someone, and realized you were wrong? Is it easier to admit your mistake and end the argument, or to keep fighting and hope to “win” anyway?

When Paul had traveled from city to city, he had begun with the synagogue for two reasons. One was theological, the gospel came first to the Jew and also to the Greek. The second was practical: they knew the Old Testament, which Paul could build on to show how it was all fulfilled in Christ. Agrippa was Jewish, and Paul could build on that knowledge while fulfilling the words of Jesus from Acts 9:15.

Younger kids: What is something you are good at? If you wanted to teach a baby how to do that, what would they need to learn first? Do you think Paul had to teach people certain things before they could understand who Jesus is?

Paul shared what Jesus had done for him (for the third and final time in Acts). But Paul was not content to just share information; the apostle wanted the king to make a decision. Agrippa had three pieces of information: the background of the Old Testament, an understanding of Paul’s conversion, and the knowledge of the incredible life of Jesus, perhaps 25 years earlier. He just needed to connect the dots. Herod Agrippa’s response reminds me of his uncle Antipas, who killed John the Baptist because he did not want to go back on a vow made at a party. Sitting beside Porcius Festus, but also before a crowd, Herod would neither confirm nor deny that he believed the prophets. Instead, he told Paul that it would not be so simple to take him all the way to being a Christian. Paul responded that whether it was easy or difficult, he wanted everyone to become as much of a slave of Jesus as he was, the chains around his wrists the only exception.

We exist, whether it is easy or hard, quick or slow, to bring people to Christ. Our goal is not to win arguments on social media, impress people with our debating tactics, or even get someone intellectually to accept what we say. The churches of Jesus are here to reach people with the precious message of Jesus.

Discussion idea: What are some practical ways we can build on what people in our society already know to bring them to Jesus?

Prayer focus: Pray for an opportunity to share Jesus with someone, and the grit to endure, whether it is easy or hard.