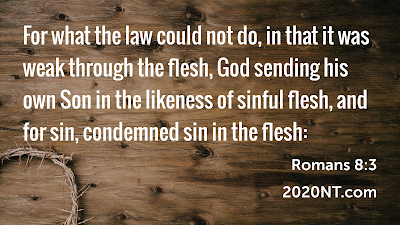 Note: Make sure to notice that today’s reading goes through 8:11. I have respected chapter boundaries so far, but I am making an exception.

My daughter is terrified of having a splinter removed. I am not sure where she got the idea that it involves amputating her arm, but there is no removing it without lots of tears (sometimes she cries, too). The easiest thing for me to do would be to give her some Tylenol and keep it from hurting. No more pain, no more problem! Except the splinter would stay inside, an infection would fester, and a minor problem could become a significant one.

Like an intervention with an addict, sometimes the best approach to a problem is to make it clear. Muddling it and numbing the pain seems kind in the short term, but it is ultimately cruel. God never chooses the easy path over the loving one, and so we should not be surprised that He does not deaden the infection, but intensifies it until we are willing to have it removed.

God did not give people the Law to get them to Heaven; no amount of good work could ever cancel out our guilt. He knew that we could never keep the Law because of the weakness of our bodies (Romans 8:3). All the Law could ever do is expose our guilt by accentuating it. When Paul was a child, he did not know not to covet, but when God commanded him not to do so, the sin in his heart rose to rebel against God’s Word, and his rebellion bore the fruit of death. Is this a failure of the Law? Not at all. The sinfulness of Paul’s heart appeared more clearly when it corrupted even a righteous commandment. It brought Paul to the point of crisis where his behavior and his values contradicted one another (Romans 7:22-23). The Law showed his frailty as it shows ours. When we realize how weak we are, we recognize that our only hope is the gospel.

There is no way that we could ever work our way to God’s level. The only way out is a radical one: like the boundaries of marriage are nullified by death, the domain of the Law ends when we die. It would be an unsatisfying escape hatch (out of the frying pan and into the fire) if we have to pass into death alone, but Jesus offers a better way. We are joined to His death by faith in Him. All the wrath of God against sin is spent on Him already; we do not just go into death but through it. We have died in the old world of Adam with Christ, and are born into a new life in the realm of the Spirit. There is no condemnation in this Kingdom we have entered by faith, only life with the Spirit that gives life (Romans 8:1). The Law has not failed; it has fulfilled its purpose by teaching us to walk in the Spirit (Romans 8:4).

Discussion idea: How does a life of obedience in the Spirit look different than someone who is just concerned with following a list of rules? Does trying to obey God in our own strength put the sin of pride into everything we do?

Prayer focus:  Pray for help being sensitive to the guidance of the Spirit in what to do and open to the strength of the Spirit to accomplish it.