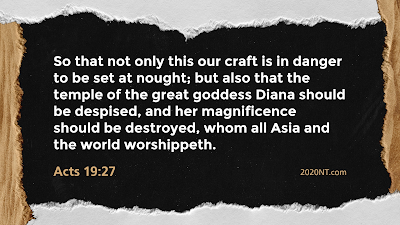 Key Verse: Acts 19:27
Big Idea: When the message of the Church of Jesus is accepted, it changes everything.
One of the classic business parables is the failure of Kodak. The company that once dominated the photography industry is now a shadow of its former self. Although they invented the digital camera, they still bet big on chemical film, and watched the world they had once shaped leave them behind. Of course, we are all guilty of loving our routine and the familiar so much that it is hard to recognize a better path. How many churches have considered the pain of change sharper than the pain of failing to carry out the Great Commission? How many marriages have collapsed because divorce seemed less frightening than being different? Rarely do we consciously think in those terms, but we recoil from change so that the effect is the same.
Younger kids: Do you have a blanket or a toy that you always want to have with you? Maybe certain clothes you like to wear over and over again? How do those things make you feel? Can God make you feel the same way when you do not have those things?
Older kids: What is the biggest change you have experienced in your life so far? How did you anticipate it would feel? How did reality compare?
If you work for a company and a new boss comes in, there will be change. When a new President is elected, there is change. In the ancient world, where a king had much more power, a change of leader could have even more drastic consequences. For a person to recognize Jesus as Lord, there will be a change, and the very thought of change is sometimes too intimidating for the benefits to ever be considered. Surely this was the case in Ephesus. Their business, their culture and their civic pride were built on the cult of Artemis (Diana). To accept Jesus as Lord, whether He was or not, would painfully upend all of these institutions, and that is what the assembly could not tolerate. So, in a town hall meeting which nearly descended into a mob, Paul was forced to leave. The fear of temporary change kept them from receiving the good news that would change their eternal destiny.
Discussion idea: Do we fear disobeying God or changing our circumstances more? Is the answer the same for every area of life?
Prayer focus: Reflect on the idea that God alone is the unchanging, eternal constant, and pray that we would find our stability in that anchor, rather than our circumstances.
Posted by Chris at 12:00 AM