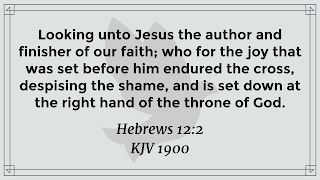 Key Verse: Hebrews 12:2
Big Idea: Our faith’s trailblazer and completer is the Son of God.

Many advances are started by one person and finished by another. Much of what we know about planetary motion was discovered by Johannes Kepler, but he built on years of observations by his mentor Tycho Brahe. Edward Jenner invented vaccines when he discovered that infecting someone with cowpox would keep them from getting smallpox, but Jonas Salk changed the world by applying the principles to polio. Even in our families, we often see things unfulfilled and picked up by others. We might read the Hall of Faith in the last chapter and think that Christianity is like that: Moses had some, David added a little more, the prophets added to that and Jesus finished it off. But today’s verse reminds us that this is not the case: Jesus is the author and the finisher of faith - the beginning and the end.Younger kids: Do you have an easier time learning to do something if someone shows you or tells you? Why do you think that is?This is what gives chapter 12’s call to endurance its bite. We have been given the perfect example of where to go and how to get there, because Jesus came to the beginning of the path when He was born in Bethlehem and followed it all the way through the cross to return to Heaven again. The example of Jesus is not a rosy picture. It involves pain, rejection and separation from the temptations for the world. If we stray from that path, God disciplines us to bring us right to the path.Older kids: How do you react to different kinds of discipline? Why does one person respond to correction by improving, while another gets harder hearted?But we do not do it because it is easy. We should hold fast to our faith, no matter the cost, for at least two reasons. First, the trail has already been blazed by the Son of God. Second, the path leads straight into the presence of our Heavenly Father. Jesus has showed us the path, and His presence empowers us to take it.Discussion idea: If Jesus were just a perfect human, we could admire the life He lived. How does the fact that He was also God allow us to follow His footsteps?Prayer focus: Is there some area in your life that you have given up and decided that some sin or act of obedience is unattainable? Pray for forgiveness and confidence that Jesus had taken the path before us.
Posted by Chris at 12:00 AM