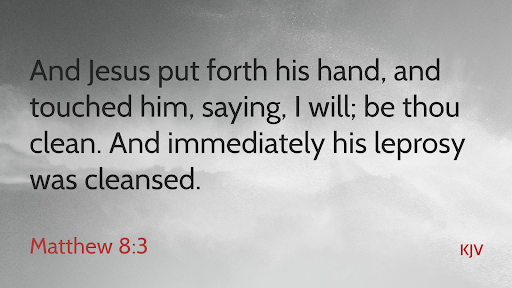 Key verse: And Jesus put forth his hand, and touched him, saying, I will; be thou clean. And immediately his leprosy was cleansed. - Matthew 8:3

Big Idea: The Kingdom of Jesus was accepted by the unexpected.

Matthew 8 returns to a reality that we considered back in chapter 4. It is the story of an invasion force: the rightful King has returned, and He finds his people oppressed and enslaved. People’s rebellion against God had them bound by sin, disease, suffering, and death. The chains were their own by birth, but they had also chosen them and were now unable to remove them. Who would Jesus use to build His Kingdom? Who would receive Him? The religious people and the upstanding citizens might be the ones we would expect, but no one deserved His mercy. Some were chained more grotesquely and visibly than others, but they were all prisoners.

Consider the lepers. Their horrible skin disease (incurable in the ancient world) led to open sores and a loss of sensation, which often resulted in severe injury. Under the Law of Moses, if they touched you, then you were unclean and quarantined until they were sure you were not infected. Uncleanness spread and contaminated everything it touched. This outcast is not who the elites expected to come to the Messiah. But he did come to Jesus, and when Jesus put His hand on the leprous skin, purity spread instead of uncleanness. After years of crippling disease, the first thing this man felt was the hand of the King. Suffering and impurity retreated at His arrival; joy and peace took their place.

After this, Jesus healed the servant of a Roman soldier, although the Romans were unclean Gentiles who oppressed the Israelites. He cast out demons, healed the sick, and even demonstrated His authority by ordering the sea itself to be still. A legion (a Roman military unit of about 5000) of demons recognized that He was the Lord and fled at His command. The unexpected received Him gladly, but how did others respond? His own disciples were afraid in the storm, not realizing who was in the boat with them. The residents of Gadara, where the legion of demons had possessed the man, were afraid of Jesus and “begged Him to go away and leave them alone.” There is a real paradox here: the ones who seemed the most promising turned from Him and the ones who were the most unlikely turned to Him.

The King has arrived. The rejects accepted Him, and the acceptable rejected Him. There is no one so righteous they do not need Him, and no one so wicked they cannot have Him. He did not call His people along standard social lines but received those who recognized their need of a Savior and accepted His grace.

Discussion Idea: Why was it easier for the blatant sinners to accept Jesus than the apparently righteous?

Prayer Focus: Pray for God to help us see people the way He does and to join Him in giving grace.