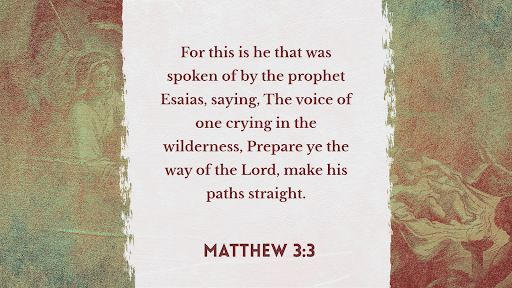 Key verse: "For this is he that was spoken of by the prophet Esaias, saying, The voice of one crying in the wilderness, Prepare ye the way of the Lord, make his paths straight.” Matthew 3:3

Big idea: John the Baptist came to prepare the way for Jesus the King.

When we are telling the narrative of our lives, there is no mystery about who the hero will be. A fundamental consequence of our sinful nature is the illusion that we are the most important people around, and everyone else exists to serve us. Like children who pick the guests at their birthday by who brings the best gifts, we treat others as a means to an end.

John the Baptist was different. He knew that he was not the main event and was always mindful that he was just the opening act. No one trying to develop his personal fan club says things like “Prove by the way you live that you have repented of your sins and turned to God” (Matthew 3:8). John’s message was simple: The King is coming, so turn from your sins and prepare for his arrival. He baptized those who believed what he taught and showed it. They were buried in the water and raised again as startling symbols of their death to their old way of living and new life with God. Those who were baptized by John formed the raw materials that Jesus would use to begin building His church (something we will see in Acts 1:22). John viewed his whole life as a tool in the hands of a master craftsman.

John was never looking for personal glory. In fact, when his big moment came, he tried to turn it down! Jesus came to him to be baptized, and John wanted to talk him out of it by saying that he was the one who needed to be baptized (Matthew 3:14). Jesus was the one whose sandals John did not feel worthy to carry like a slave. But John did submit to baptizing Jesus to fulfill God’s righteous plan, and when Jesus came out of the water, the Father Himself declared His pleasure in the Son. The one who had devoted his life to preparing the way for the King was ultimately able to prepare the King Himself.

How different would our ministries and lives be if we saw ourselves as extras in a play where Jesus is the only star? Which humbling opportunities would we take? Which impressive ones would we leave on the table? If John the Baptist has been one of the countless Jewish rabbis that tried to build a following for himself, we would never know his name. Because he chose to seek God first, he has gone down in history as the one who prepared the way for the Lord.

Discussion idea: Which of your priorities would be different if you believed that your ultimate purpose was something beyond your own life? What patterns of selfishness do you see in your life?

Prayer focus: Pray for God to give you strength against the things which feed your self-centeredness and to give you the clarity of mind to see your place as part of a much bigger puzzle.
Click here to sign up for daily emails with these posts.
Posted by The New Testament in 2020 at 12:00 AM