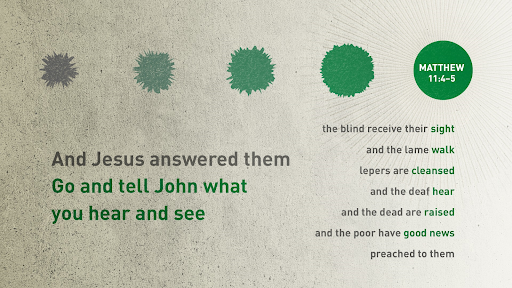 Key verse: "The blind receive their sight, and the lame walk, the lepers are cleansed, and the deaf hear, the dead are raised up, and the poor have the gospel preached to them."  Matthew 11:5

Big idea: The Kingdom testifies about the heart of the King.

Jesus was the one who would take away the sin of the world. John the Baptist was sure of that. But if the promised Messiah had come, why was wicked Herod still on the throne of Israel? Worse, why was John imprisoned for no crime other than telling the truth about Herod’s sin of convincing his Herodias to leave his brother to marry him? It seemed strange that the King had finally arrived, but things continued as they always had. So John sent a messenger to Jesus to ask the obvious question: “Are you the Messiah we’ve been expecting, or should we keep looking for someone else?”

John did not seem to doubt Jesus, he was still willing to accept Jesus’ word about His identity, but he doubted himself. Had he misunderstood when he trusted Jesus was the King? Jesus did not rebuke John for his question. Instead, He told the messenger to return with evidence that the Kingdom was here, even if it was not fully manifest in John’s situation. The blind, the lame, the deaf, and the lepers were healed, and the good news was preached to the poor. God’s reign was breaking through into people’s hearts. From our modern world, we have far better evidence than John ever did. The Baptist died long before Jesus was arrested, beaten, mocked, and executed for the sins of the world. Proof that the love of God is here on full display. On the third day, the penalty paid, He rose again triumphant. Proof that the power of God is here on full display. The King is here, and His power is defanging the old oppressors.

We have the evidence, but will we believe? Jesus condemned the Pharisees and scribes for refusing to believe but dealt tenderly with John, who just needed the reassurance of his Master. Indeed, Jesus said, “I tell you the truth, of all who have ever lived, none is greater than John the Baptist.” Yet the least born into the Kingdom of Heaven is greater than the least born physically to a mother. John was an incredible man, both a prophet and the fulfillment of prophecy, but we can be his brothers and sisters by faith. Jesus’ conclusion of the chapter is powerful. He thanked the Father for not revealing Himself to the impressive and the wise, but the childlike. We do not enter God’s family because of our merit but because of His grace.

Discussion Idea: How does your approach to people with doubts compare to the path Jesus took with John?

Prayer Focus: Thank you, Lord, for revealing Yourself to us, when we were undeserving and had nothing to offer You except a sin-stained heart of faith. Thank You for bringing us into Your Kingdom with patience and compassion. Help us to see that even though Your Kingdom is not yet fully revealed, You are working in our lives.